When COVID-19 hit, artist Simon Daniel James lost all of his jobs, but then two of his biggest commissions ever came through, all in the same year

It was March 15, 2020 when the schools closed and all of the jobs artist Simon Daniel James (Winadzi) had lined up fell through.

Luckily, the Kwakwaka’wakw artist – who has lived on Bowen since 2007 – had one major job come through: panels for the exterior of a low income housing building in Gibsons. “It’s a feel good project for me,” he said. The panels depict the creation story of Raven releasing the sun. 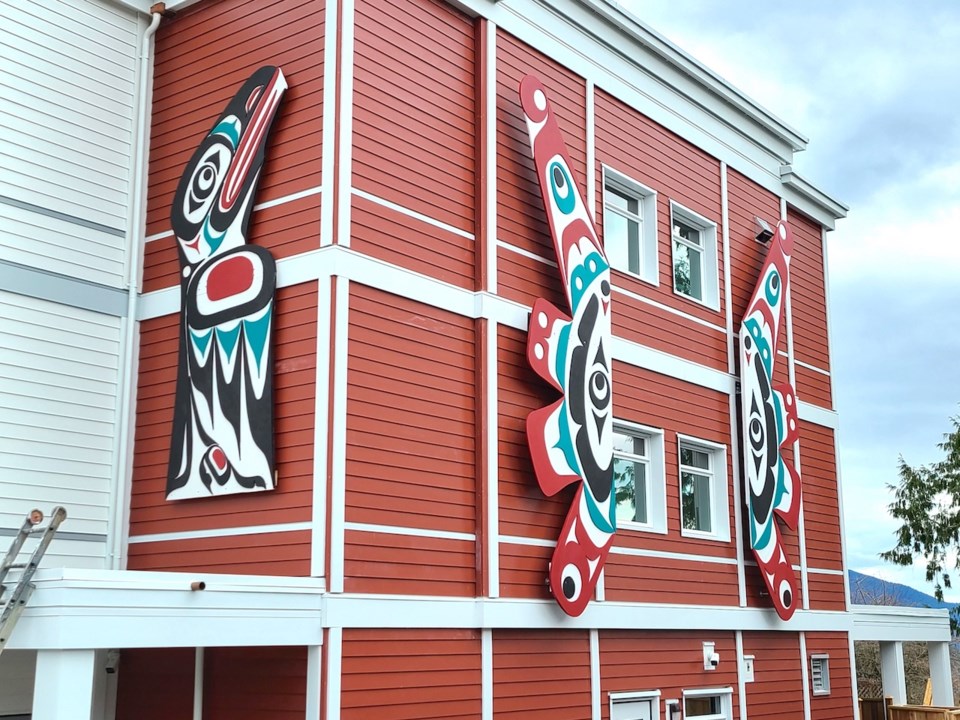 While working on the panels last summer, James got a call from a friend saying there’s this client building a house on a neighbouring island and the client wants him to carve something. “I honestly thought it was going to be a mask or a panel or something small.” The commission wasn’t small. “Two totem poles, side by side, with a beam that goes across. Twenty feet high and 24 feet wide.

The Gibsons panel project was the largest commission of James’ art life – this was the second largest. “Both of them in the same year,” said James. “And I never turn down a job, I  just figure it out.”

James hired some family who were unemployed due to the pandemic and they went to work starting last September.

His immediate family was also fully involved. “My wife and my stepmom started peeling logs with me and my children were sweeping up every day and filling up bags,” said James. For sustainability reasons, the logs are second growth.

While James’ eight-year-old daughter is happy to run around helping – she wants to be an artist – his 10-year-old son however is a negotiator. James wound up paying his kids $7.50 an hour to help out, the price of an ice cream at USSC Marina. “It’s just such a feel good project because my whole family is involved,” he said. 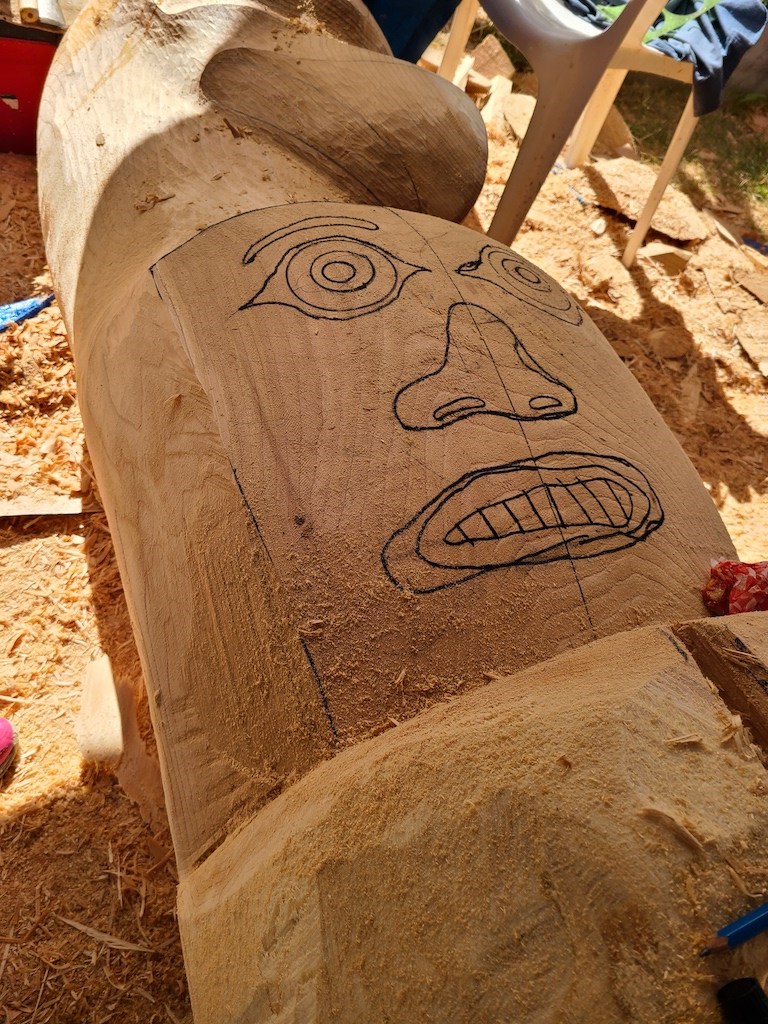 James' daughter Mizuki drew this face on one of the totem poles. By Courtesy of Simon Daniel James

“It was just an amazing thing to happen.”

But then James’ health started going downhill. He burst a tendon in his leg and then about two months later, he was sitting at home after making breakfast for his children when the room started to spin. “It felt like I was being flushed down the toilet in the middle of the room.

“I spoke at the United Nations, I speak in public, I’m a storyteller and I was having difficulty calling 911 and telling them who I am, where I am and what’s going on,” said James. He was diagnosed with vertigo, likely from all the stress.

The panels are mid-installation in Gibsons and James hopes he’s about three weeks away from completing the totem poles (“It’s difficult to paint when it’s three degrees!”)

The totem poles’ story comes from James’ ancestors – it’s a story his father told him.

“The beam represents a serpent and this transformer – I just decided to do it in a serpent way – came to one of my ancestors, and said, ‘I know who you are,’ and told him his name.

[The ancestor] said, ‘Well, I’ll take your word for it, because I don’t know who I am. I woke up this morning not knowing.’

And then the transformer said ‘You are the man that I’m looking for.’ 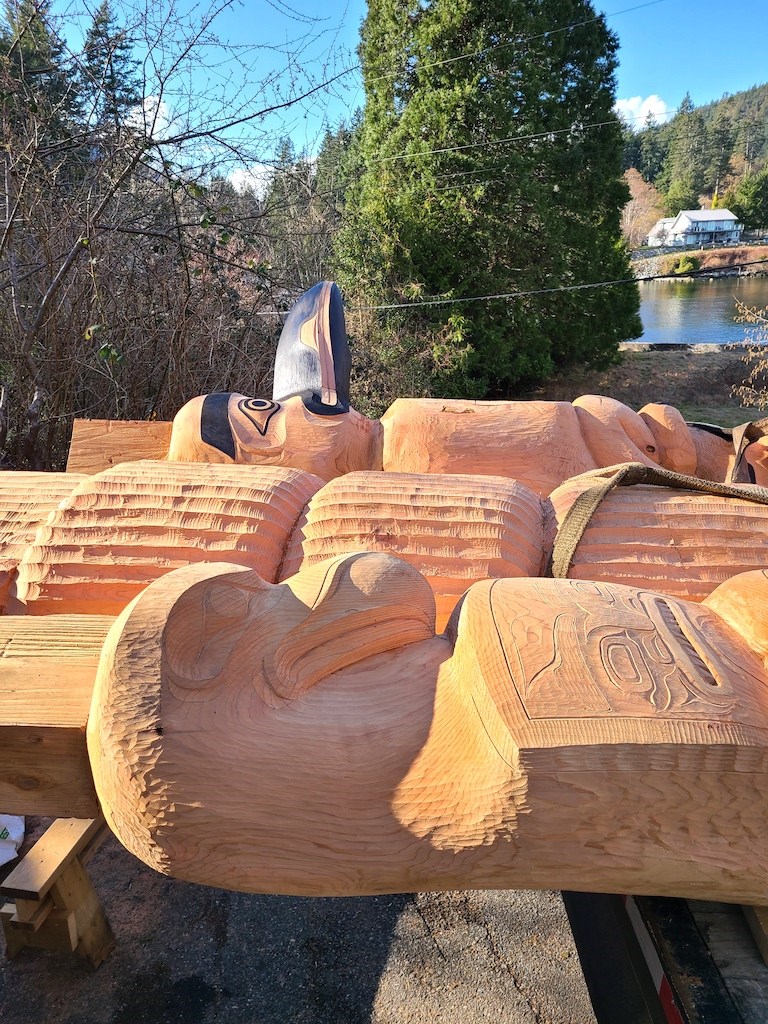 The birds of the totem poles as they were being moved. James’ family moved from the Cove to the west side of the island this month and, as they weren’t quite done, the poles had to move too. . By Courtesy of Simon Daniel James

And four times the transformer came back. And [the ancestor] was sitting there still. He burned his body in a fire, he drowned him in the ocean, and on the fourth time he came, he said, ‘you are definitely the man I’ve been looking for.’ And so he brought him a canoe filled with treasures and wrapped around the canoe was a design of a serpent. A double headed serpent. And he told him, ‘All you have to do is think about where you want to go, touch the paddle to the water and be transported there immediately.’”

The design depicts that story. The 24-foot beam with the spiral totem poles on either side – an eagle on one side, a raven on the other. “Because it’s a transformer – he transformed into different creatures.”

“In this little story, he transforms into an eagle, a raven, a bear and a wolf, and then transforms back into serpents again at the bottom.”

The serpents spiral in different directions and at the bottom face one another “kind of as guardians to the entrance of this house.”

“And I just wanted to make the client feel safe by having guardians, so that’s what this is.”

Commissions for James have picked up since the pandemic began. “I’m loving that my recognition now is getting out there. Where people want me to put designs on buildings, public art pieces. I’m doing lectures again,” he said. “I feel great, because a year ago, I lost everything. I lost all of my jobs and my wife and I were just so uncertain about what we were going to do.”