Update May 20: The plant is still undergoing commissioning and hasn't yet been activated, said a BIM alert. The activation is postponed for now.

There’ll be many Snug Cove residents raising a glass this week – a glass of clear, non-yellowy, water.

While no action is required of the 600-odd users in the water system, it’s possible there could be some hiccups with “performance metrics” (water pressure and service could be affected) as the new system falls into place, a Bowen Island Municipality service notice indicated.

This is a quiet launch with the muni planning to hold a grand opening later in the summer.

Back in 2014, Vancouver Coastal Health informed BIM that the Cove Bay system treatment was susceptible to pathogen contamination and that it didn’t meet watershed protection requirements. (The Greater Vancouver Regional District also identified the need for Cove Bay water treatment as far back as 1997.) This week, the new plant replaces a dilapidated shed a few hundred metres away from Grafton Lake – the Cove’s water source. Until now, water from the lake has gravity fed into the shed, had dirt and debris screened out, been injected with chlorine for disinfection and then has flowed its way to Covians’ taps. Chlorine can kill a lot, but there are still pathogens – like the diarrhea-causing Cryptosporidium parvum – that can slip through. 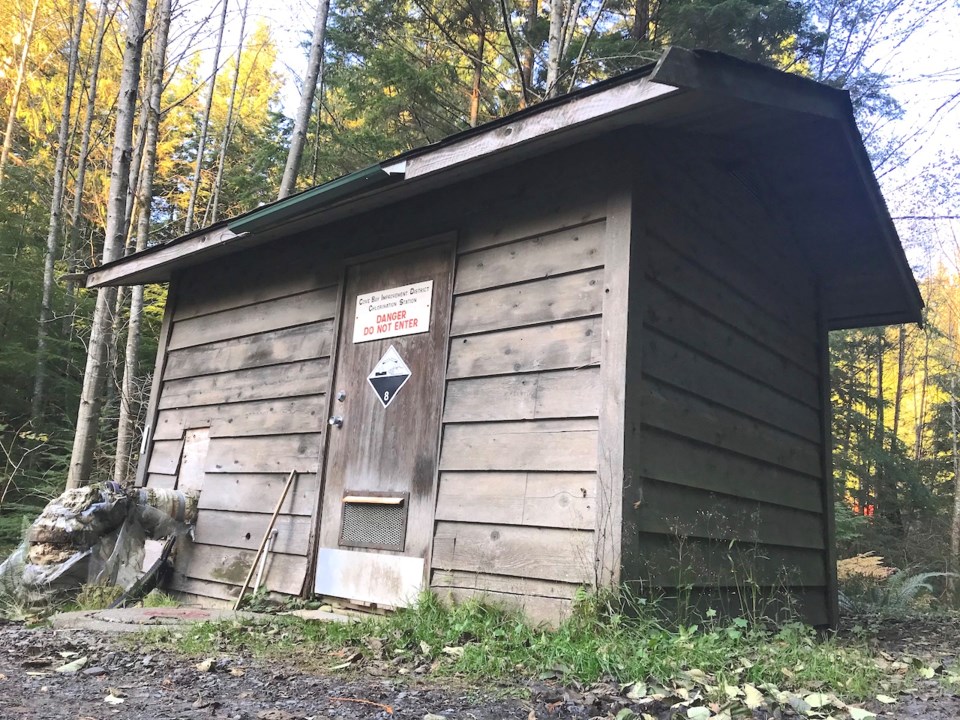 The chlorination shed that's long been the source of treatment for Bowen's largest water system. (Pictured in 2019.). By Bronwyn Beairsto / File

The province advises that people with compromised immune systems boil water from ground or surface sources that hasn’t been boiled, filtered, distilled or treated with UV. This ceramic membrane ultrafiltration system does away with any boiling need for Cove Bay, said BIM’s director of engineering, Patrick Graham.

In water systems, there’s ideally a double barrier – in this case filtration and disinfection (chlorination). In the new system, after the water’s fed from the lake through the filters, it’s chlorinated and pumped into the giant reservoir beside the building.

But, there’s also a requirement to maintain chlorine residuals throughout the water system to ensure there’s no regrowth of anything, said Graham. The health authorities require at least .2 milligrams of chlorine per litre of water. As there will be less chlorine in the water coming from the plant than from the old shed, there’ll be some adjustments to the rechlorination stations throughout the system. “It will take a little bit of time to work through that and have it running optimally,” said Graham.

Disinfection byproducts trihalomethane (THMs) and haloacetic acids (HAAs) produced when chlorine comes in contact with organic matter (like decaying leaves and vegetation) have been slightly higher than recommended in Health Canada guidelines in the Cove Bay system in recent years. “That’s not going to be a problem anymore because the water is going to be filtered before it’s chlorinated,” said Graham. “So the filtration will remove organic and inorganic particles and pathogens and viruses. It’s a very high level of filtration.”

The system’s newly filtered water will probably take a couple of days to replace the old water, said Graham.

“But it’s a little bit tough to tell because we’re still going through commissioning,” said Graham May 14. Last week, BIM and contractors worked through commissioning – running through all of the systems and controls. As they may need to do some additional testing, the system switchover will likely be later this week. “We have to make sure that Vancouver Coastal Health is satisfied with all the testing that we’ve done,” said Graham.

The main component of the plant – the filtration system – is supplied by a company in Ontario. While the company had people on Bowen last week, they left Friday, and there were still issues to work through. So to allow for remote support, a Starlink connection was set up until regular internet service can be put in.

New tax to pay for project

While the land was part of an exchange – BIM received the 0.8 hectare parcel as part of developer John Reid’s subdivision of the Grafton Lake Lands back in 2018 – Cove Bay users will be seeing a new parcel tax this year to pay for the plant’s construction.

When BIM received $3.89 million in government grant funding for the project in 2017, that was two-thirds of the project’s estimated cost. The municipality expected to contribute $1.95 million through reserves and borrowing.

In 2019, the estimated project cost grew to $7.6 million. Taking into account Cove Bay’s $1.10 million in reserves, the discrepancy between grant funding and amount needed  to fund the project grew to $2.53 million. Through an alternative approval process, Cove Bay users approved borrowing that $2.53 million to be paid back over 30 years.

Last year, the project cost grew to $9.26 million. Council approved extra funding – $485,400 from developer contributions and $1.15 million borrowed from its own general fund (the borrowing to be paid back over 10 years).

But Cove Bay users may get some help shouldering the cost of the plant. With the Grafton Lake Lands development, each new connection brings in thousands of dollars. There’s also talk of the Eagle Cliff water system joining into Cove Bay. And Graham said he’s had conversations with other east side residents who may be interested in connecting into the newly filtered system.

“It’s an exciting step,” said Graham. “And there might be a few little bumps along the way. It’s a dramatic change in the supply.

“It’s setting the standard for what level of service Bowen Island water systems should be.” (That doesn’t mean $9.3 million treatment plants across the island, Graham confirmed.)