Bowen's multi-use path phase one construction to start this month

The first phase will run in between Mount Gardner Road and Carter Road over the next couple of months.
Mar 4, 2021 1:36 PM By: Undercurrent 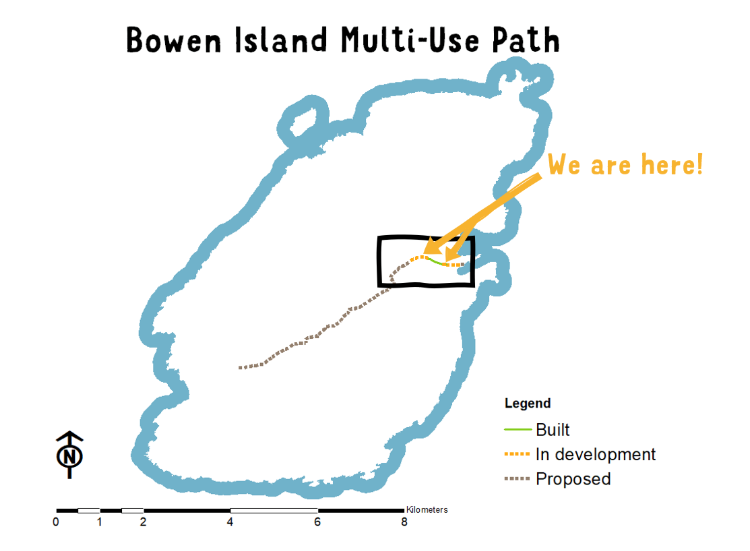 After years of delay, the cross-island multi-use path is finally getting started.

The 13-week schedule will see construction start in March, so as to qualify for soon-to-expire Bike BC funding. (The first phase of the pathway was set to start in 2019 in the Charlie’s Lane area of Grafton Road but after engineering estimates came in over budget, the project was reevaluated).

“The tender was competitive and resulted in a low bid from Triex, a reputable contractor that has performed well on previous municipal construction projects,” said the press release. The Triex bid came in at $547,565 plus tax.

“Another key component of this phase is an intersection improvement at Mount Gardner Road, which is particularly busy with ferry marshalling and student traffic,” said the press release. “The improvement will have better sightlines and traffic calming to help maintain safe vehicle speeds and awareness of pedestrians.”

Should more grant funding come in, more sections of the path could be built this year, said the press release. The entire path, intended to be an extension of the North Shore's Spirit Trail, BIM plans to build in seven phases over the next 15 to 20 years, depending on technical requirements and funding.

“Of the 75 kilometres of public roads on the island, less than 0.5 km have sidewalks and those are only within Snug Cove,” said the press release. “Roads on the remainder of the island are built to a rural standard (single lane in each direction) with little or no shoulders.”

“Pedestrians and cyclists are usually forced onto the vehicular travel lanes for part or all of their trip. And the hilly island terrain results in many steep and winding roads that create additional hazards for those that brave walking or cycling.”