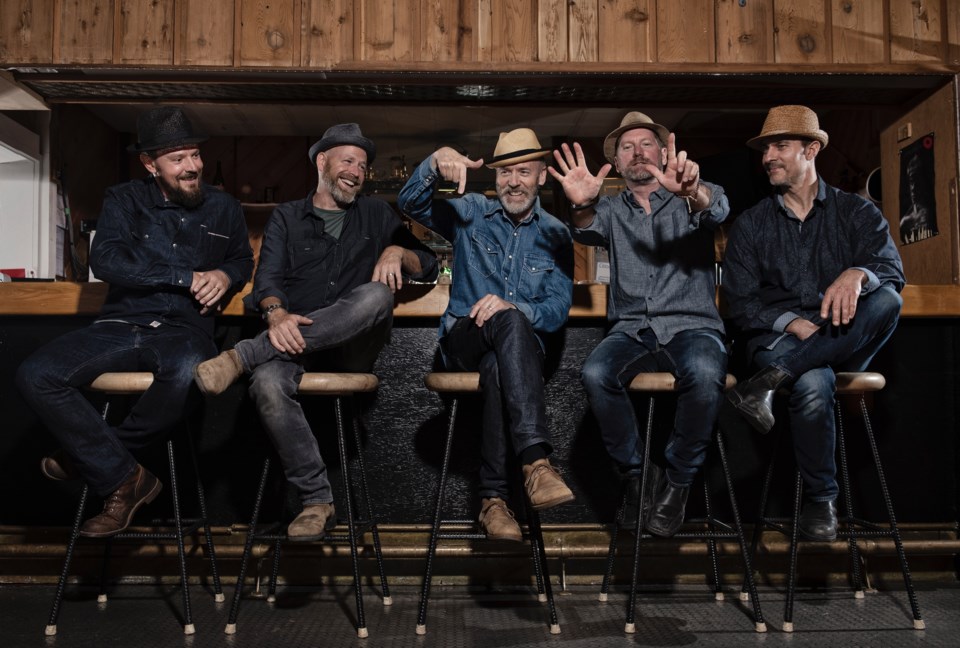 Jon Siddall had barely unpacked upon moving to Seven Hills in October 2015 when neighbours Chris Barnett and Tobyn Ross came knocking. They had heard Jon was a musician – and a now-retired CBC music producer – and they wanted to play. The three hit it off.

What started off as just fun – jamming, playing songs – before long got a little more serious and the trio decided they wanted to form a band. Sticking hyper local, they realized another neighbour within a minute’s walk, Mike McKoryk, is a bass player and after some cajoling, McKoryk agreed to join the crew.

And so was born Straightup Sevenhills, the four neighbours and geographical deviant Pete Robinson – also of Ginger 66 and Black Molly fame – who lives on Cates Hill.

Starting in about 2017, Straightup Sevenhills had audiences dancing nights away at the Pub or the Legion. But, since the pandemic began, the band’s only audience has been, ironically, Robinson’s Cates Hill neighbours as the crew practiced distanced on his deck.

Along the way, the band started recording their first EP.

“With the exception of me, the other guys in the band are really incredible handymen,” says Siddall. Barnett came up with an invention they called the anti-covid chamber. About the size of a shower stall, the box covered in heavy fabric was a recording booth – just big enough to play a guitar, saxophone, sing – set just inside a doorway.

One at a time, the men would go into the anti-covid chamber and play their part.

“It was a pain to have to do that every time,” says Siddall. “But we got it done.”

They finished in about January.

The band released the lead single – “Pond Dreamer” – and its lyric video in the last week and the seven-song EP, Higher Ground, will come out May 7.

“Most of the songs would be new to people,” says Siddall. “I think people got used to hearing us at the Pub or the Legion and we played more party songs, kind of dancing songs.

“I think with the pandemic and everything, we shifted a little bit in the songs that we’ve been writing during this time,” he says. “A little more introspective.”

“We were keen to get it out during the pandemic because it felt like music that you might want to listen to during this time.”

While members wrote some songs before the pandemic, most were written in the last year. They may not all address the crisis directly, but the moods of the past year have affected the music.

“There’s a certain alchemy that’s involved in a band coming together. We’re talking about five individual people who each bring something,” says Siddall. “Musically, but also as a person.”

“You hope that the alloy that results from this alchemy is something that – what is the expression – is greater than sum of its parts. That something even better emerges.”

“This collection of songs feels good together,” he said. “It’s a lovely little journey from the first song to the end.”

“We can’t wait to have a chance to play music for people live again. In the meantime, though, we’re super stoked to be able to share some recorded music with everybody and hope that it helps them get through these tough times.”

Find Higher Ground online as of May 7.

Correction: An earlier version of this story said "the hour that results from this alchemy," – the EP is 32 minutes long. The word was "alloy." Our apologies.