From looking at lifting a cannabis prohibition, to awarding art, to the departure of a longtime staff member – here's what happened at the July 12 regular council meeting.
Jul 15, 2021 2:30 PM By: Bronwyn Beairsto 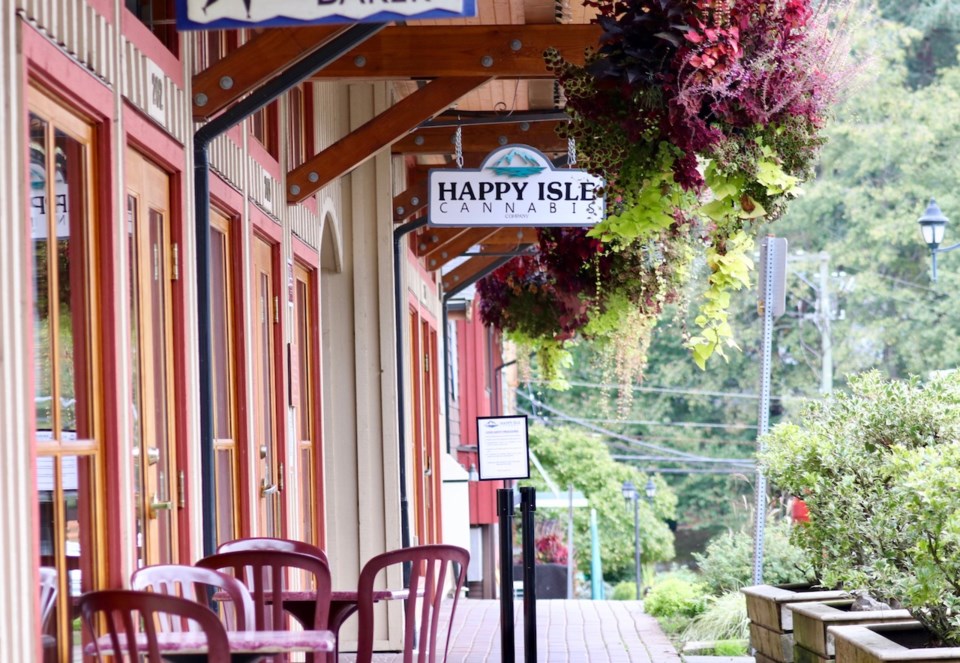 Happy Isle Cannabis Company opened in May 2019 under a temporary use permit. Now that it's seeking a rezoning, and given the provincial restrictions in place, BIM is looking at removing the pot retail prohibition on-island. Bronwyn Beairsto / Bowen Island Undercurrent

The following are briefs from the Bowen Island Municipality regular council meeting July 12:

Back in 2018, in anticipation of the legalization of cannabis in Canada, Bowen Island Municipality imposed an island-wide prohibition on cannabis retail. The idea was that dispensaries – like Happy Isle Cannabis Company – could get temporary use permits and rezonings to allow their specific existences. Now that Happy Isle (opened under a TUP in 2019) is applying for a rezoning, council is considering removing the outright prohibition, instead allowing cannabis retail in zones that list “retail” as a principal use (there are eight such zones on Bowen). This wouldn’t mean pot could be sold just anywhere. Any dispensary needs licensing from the Liquor and Cannabis Regulation Branch (which has its own regulations) and  LCRB can only give a licence if the local government gives the store a positive recommendation.

BIM is also looking at adopting a cannabis policy to guide how it would deal with such requests for recommendations (looking at proximity to schools, parks, other dispensaries and so on).

Council unanimously passed second reading of the bylaw and referred it to public hearing.

Scenes of Bowen on the lock-block wall

The future is decided for the ugliest stretch of Snug Cove.

Council awarded Sarah Haxby, Paula Love and Di the lock-block wall project – a mural over 16 panels to be installed on the stretch of painted concrete.

A proposal from the three experienced artists won out over 11 other submissions received in response to BIM’s May open call.

While the artists will design the overall work, they propose “an interactive community-engagement artwork, with contributions from artists of all ages,” including a “paint-by-number” style background and unique individual elements (for example an orca of preschoolers’ hand prints).

“The goal is to create a welcoming and inviting entrance to Bowen Island that is nature-based as well as celebrating our local heritage, culture and community spirit,” said the proposal.

A BIM staff report noted the quality of submissions to the open call and potential for more public art.

The lock-block wall beautification project did receive some community pushback over the durability and suitability of a mural over the wall.

Coun. Maureen Nicholson assured council that the durability was top of mind for the Public Art Advisory Committee (which issued the open call and selected the artwork) and the panels are made of the same material the province uses for highway signs.

The project budget is just under $20,000 with a $15,000 donation coming in from Sangre de Fruta Botanicals.

Centre out to tender

BIM CAO Liam Edwards made note that the community centre project was sent out for tender in mid June and is set to close in coming weeks.

Edwards also made note that community planner Emma Chow, who joined the municipality back in 2015, is leaving BIM next week. “We’re going to miss Emma a lot,” said Edwards, noting the planner’s work on on-island transportation and the multi-use path.

“She was really very, very important in moving forward with so many of the transportation initiatives, including our transportation strategy,” said Coun. David Hocking. “Congratulations on moving  to a more senior position, and with City of North Van, that’s great, but very, very sad to lose her.”

At its special council meeting July 8, Islands Trust Council put off first reading of its draft policy statement until December.

The Trust-guiding document, adopted in 1994, is in the midst of a multi-year revision. The draft policy statement roused controversy within the member islands with questions of adequate consultation with communities and First Nations, overreaching jurisdiction, prescriptive language, format, and more. A petition of more than 700 signatures called for a pause in the process.

The new draft statement draws on three pillars – reconciliation, climate change and affordable housing – things that cannot wait, according to Galiano trustee Tahirih Rockafella, who moved that council give first reading. “Now is the time for governments, us included, to be stepping up to the plate, to be listening to all those people that haven’t written us to listen to the environment,” she said. The motion was defeated sixteen to six (Bowen trustees were split – Trustee Sue Ellen Fast for and Trustee Michael Kaile against).

Trust Council opted instead to receive the draft document and refer it out for further consultations.

“Between now and September, trustees will share the draft new Policy Statement with their communities and ask for feedback to be provided to Islands2050@islandstrust.bc.ca. At the same time, staff will revise plans for the Islands 2050 formal public engagement process, which will include online and in-person events and webinars,” said an Islands Trust press release.

Bowen Island councillors briefly discussed the draft document at Monday's council meeting – the effects the changes could have on Bowen and threw around the possibility of thoroughly discussing the document in a Bowen council meeting in coming months.

“What I didn’t like about it was that the fact that they treated Bowen as if it was every other island in the Trust, and we are different, there’s no question,” commented Mayor Gary Ander. “So the impact is going to be much different on Bowen than it is somewhere else.”