One Cape on Bowen chapter closes, so what comes next? 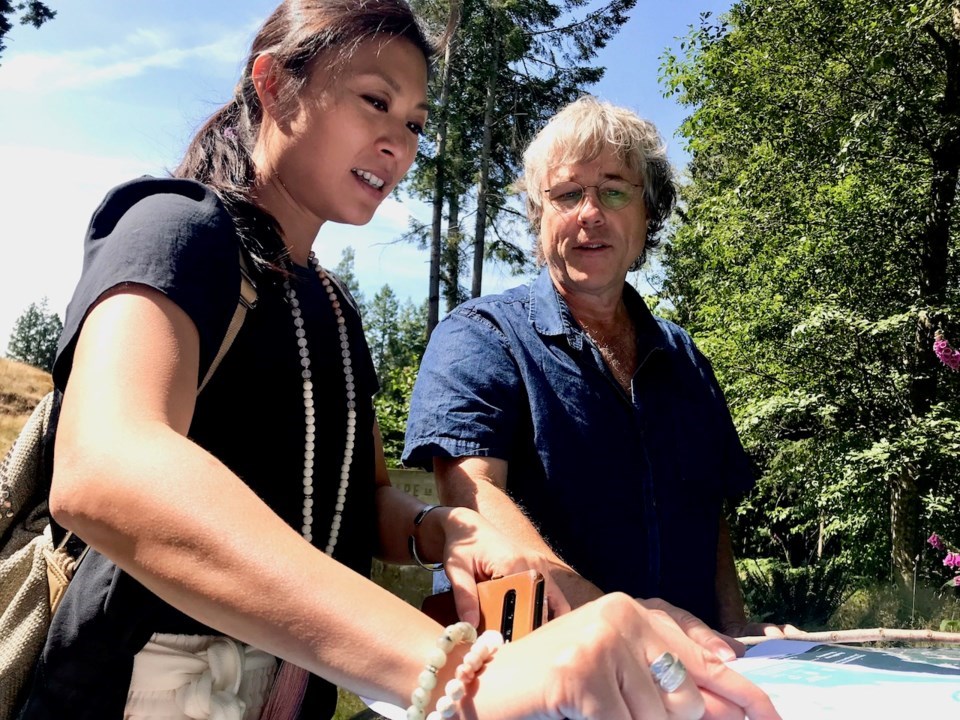 The story of Cape Roger Curtis is a mire of hurt.

But, its latest chapter closed quietly in February as Cape On Bowen CEO Candy Ho ended a master plan project that would have proposed increased density in exchange for increased public land and diverse housing.

The plan, developed over the past couple of years, would have involved official community plan and land use bylaw amendments, moving the development from 32 ten-acre estates to about 430 living units (estimated at 750 to 850 people) with more than half of the land dedicated as park space. No plan was submitted to the municipality.

The project ended after a recent survey indicated that any kind of rezoning would be a contentious affair. (It recorded 39 per cent approval for the plan.)

Ho and Cape on Bowen consultant John Dowler sat down with the Undercurrent in March (over Zoom) to discuss the decision to end the project.

Best use of land

Ho maintains that the effort of the past couple of years was to see if they could “do better” with the land.

“The other major, major objective was to heal the wounds to come to an understanding with the island,” said Ho.

Which is why, Ho says she feels huge relief after ending the project. “I don’t want to cause anxiety for the island,” she said.

“The highest value of the survey for us was to really come to that understanding. Not just through conversation, anecdotes, but [through] something that is quantified and reliable,” she said. “That gives us the chance to be at peace.

“We didn’t think 59 exclusive estates to just 59 families serves the land justice but if that’s what the majority of people feel good about, then we can stop feeling so terribly ashamed and guilty about those 59 estates.

As it was a decade ago, the density asked in exchange for preserved land and diverse housing proved too much.

Even among those who liked the idea of a village out at the Cape, the number of units seemed high said Dowler. “It echoes what we heard right from the start, is people didn’t want a lot of people living out there.”

Ho noted that there were comments that the level of density next to the conserved land could endanger the conservation objective.

The Tunstall Bay community also highlighted concern about traffic on Whitesails Drive. The once quiet dead-end road has seen the effects of people living at and visiting the Cape.

For Dowler, who campaigned against the Cape development a decade ago and against the docks, his priority was to preserve land.

“So for me, I would still like to see some way to accomplish that,” said Dowler.

“I was sort of privileged to have the chance to see how [the proposed unit] numbers were arrived at. So I was satisfied that it didn’t have to do with greed. It just had to do with the economics of land of that value.”

“The total number [of units] required to make it work was too high because of infrastructure costs,” said Ho. “Land costs, out of the whole picture, was maybe 30 per cent of the economic equation.”

The Cape on Bowen will release lots to market this summer, said Ho, but for now that won’t include the remaining 81.62 acres of waterfront.

“[The shareholders] are giving me some time to work on the conservation,” said Ho.

Inspired by the deal with the Bowen Island Conservancy in October, where an anonymous donor bought three waterfront lots for the conservancy, Ho is looking into eco gifting and tax benefit programs to conserve the waterfront.

“There are just so many incentives right now in the world to try to facilitate this kind of…giving economic value to ecology, so that we have a chance of taking it out of real estate development.”

Ho is looking for opportunities where land owners aren’t expected to simply give away land. She looks to giving economic value to ecology of near equal or greater value than residential, commercial or any kind of structural land development. “The world is still very much running with the economic realities and practicalities,” she said. “We can help landholders, land owners, make a case where they’re not the martyrs – the single party that’s giving up tens of millions of dollars to save planet Earth.”

It’s not just the waterfront Ho says she hopes to protect.

The shareholders have also agreed to register more enforceable protections on the land (covenants), said Ho. She made an environmental and land value case for voluntarily adding protections. “People choose to have a home here…for nature,” she said. “[Shareholders] know that they need to protect it better…Not just hope for it.”

Ho has asked for a proposal from the environmental consultant for some effective and enforceable measures. But there is some need for haste to put protections in place before lands come to market. “Because our recent two sales saw a lot of clearing,” said Ho.

However, what to protect and how is also a conundrum. The entire area is a mix of rare ecotypes and ecologically significant, said Dowler. “That was the challenge right from the beginning. It’s rare for Bowen, and it’s relatively rare for the whole region. So in a perfect world, the whole thing would be a park.

“But we have gone into depth about why this isn’t a perfect world.

“I think what this plan was trying to achieve was to have a representative sample of all the various types of smaller eco types,” he said. “It’s a really good question as to whether 10 acre lot zoning in itself is going to protect all those eco types but that’s certainly the aspiration.”

After two years, what was learned?

“The more chance people have to discuss the issues and learn from them,” he said.

Another point, was the idea of paying market rate for land. “This idea that land that should be preserved for its environmental value has to be sold at a lower than market rate…seems to be a way of discouraging that practice,” said Dowler. “I think if we want to preserve land, we have to be willing to buy it at the market rate. I don’t think we can just expect people to always be gifting it...even though that’s great if they would.”

Dowler also said he’d like to see the day where one could have developers and environmentalists in the same room. “It’s a little too easy to go to the barricades and just not understand each other,” he said. “Because if you don’t understand the other person’s needs, you don’t really have to consider their needs.

“If you see each other as human beings, you realize, okay, it’s not us against each other. It’s us against this impending doom that we’re all facing.”

“Scrapping between ourselves doesn’t make sense but also making decisions that nobody wants, wouldn’t have made sense. Like in this case, I think the conclusion is a good one,” said Dowler. “It was clear that the numbers were just not right for Bowen Islanders so don’t think that we’re upset about that.

“What I valued about this process is there was a sincere effort to start a conversation, give as much information as clearly as possible over a long period of time. And I think that, if we can build on that, it’s going to have a better outcome for everybody.”

The survey results report is available at envisionthecape.ca.

A brief history of Cape controversy

Tensions around use of the Cape began more than a decade ago when developers Don Ho (Candy’s father, who maintains a small non-controlling share of the development. Candy has no shares) and Edwin Lee bought Cape Roger Curtis. The previous owners of the more than 600 acre property had left the Cape as is and it acted like a public park, but after Don Ho and Lee bought it, they soon had development proposals in the works.

The proposals went through several iterations and came to a head in the 2008 civic election. On the table was an official community plan bylaw amendment that had passed first reading. Don Ho had proposed to save the Cape’s waterfront for a public park, instead building a dense neighbourhood a little to the interior. Included in this neighbourhood would have been both single and multifamily housing and a retirement community. The problem was, the Official Community Plan only allowed for 224 units on the property and the developers wanted to build more than 500, saying that’s what needed to be done to make the project profitable.

In the early days of the new council in April 2009, the first reading of the OCP amendment was rescinded.

The master plan process had seen millions of dollars, years of work, and the 2008 financial crisis had hit, and so the developers reverted to what the land was already zoned for – 59 ten-acre lots.

In its 2011 update, the OCP was amended to reflect the 59 lots at the Cape with the caveat that council would entertain further amendments to density in the area.

A few years after the neighbourhood debate was laid to rest, tensions once again came to a head when waterfront property owners wanted to build docks on the cape shore.

After a couple of (very long) docks were built out from Cape lots, sparking local outrage, council got involved, enacting bylaws to limit the length of docks and eventually banning them altogether at the Cape. The fifth and last dock allowed at the Cape began construction in August 2018, erected by Zuo Zongshen, a motorcycle-made billionaire.

Between 2013 and 2015, the municipality repeatedly denied Zongshen building permits for a dock, as each time he came back with a revised design, the bylaw had changed to be increasingly prohibitive. So Zongshen sued the municipality to be able to build his dock and in August 2017 the B.C. Court of Appeal ruled in his favour.

The possibility of a Cape rezoning reared its head during the 2018 municipal election when an accidentally released prospectus quoted two municipal candidates voicing support for the idea of an aging in place development out at the Cape.

In 2019, Candy Ho became CEO of the Cape on Bowen (she was previously the executive officer) and launched a multi-year process of developing a master plan proposal for the remaining 35 lots of the Cape (now 32).