Three months in a plastic sleeping baggie: the true story of Richard the Tick 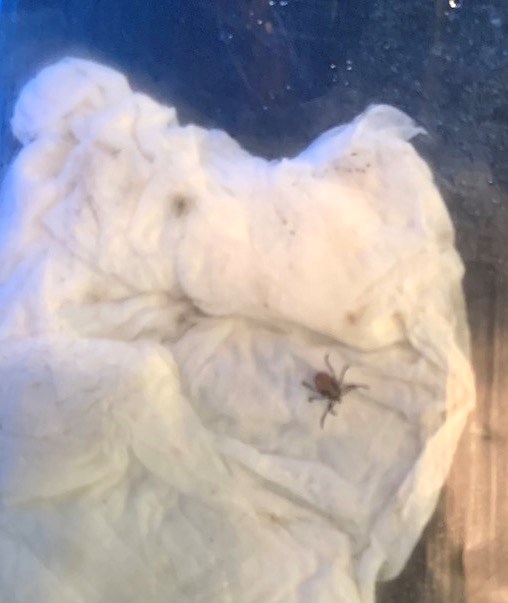 Richard the tick after three months inside a plastic sleeping baggie. March 2021 Courtesy of Peter McLean

I wet a scrunched up piece of paper towel and put it in a baggie...along with the tick...for safe-keeping until I sent it off for Lymes analysis.

I forgot about it until I found the baggie under some papers a month later.

When I first rediscovered it I thought it may have melted and figured the faint brown smudge on the still damp paper towel was the decomposed remnant of this despicable critter. Yet...a couple of hours later I noticed a dark speck on the wet towel that was now sweating in a rare beam of late morning sunlight...it was tanning itself. Hardy thing.

I kept it where I could see it as one does with all things risky.

One morning I was astounded to see it run from one end of the baggie to the other. This was no limping, malnourished tick...this was a belligerent bug showing no signs of diminished mojo.

It has no name.

It has no life to speak of.

It has ambition though...one day I saw it investigating the baggie’s patented, hermetically closed seal for a flaw that might offer an escape route. Failed crusade...but ambitious nevertheless.

A vague sense of guilt is tainting the suburbs of my auric field...guilt so inconsequential that the simple act of giving this micro-vampire a name might make my guilt vanish. Dick?

Either that or release it into some invasive bush across the street...the latent Buddhist streak in my nature suggests that releasing Dick into Bowen’s wilderness instead of bursting his wretched carcass between my thumbnails would be a wise karmic option.

I mean...he is still thriving...now...three whole months later. He has no iPhone or Netflix...no wine nor puzzles...no social life = no need for a mask...just 24/7 in a plastic sleeping-baggie with a wet paper-towel to suck from and hide under.

The worst part is Dick probably hates me...I strongly doubt he would have taken into consideration that I am the only reason he hasn’t frozen to death.

What does HE know about cold?

The only good thing that’s come of this is there is now documented proof that manna is real...but we shouldn’t get too excited about that...there was just enough for a tick and now all three months worth of it has been squandered...on Dick.