A taste of the era: USSCo.'s newsletter – 'The Heaving Line'

Les Wallwork describes a cold winter and a need to rejuvenate the island's tourism model
Dec 7, 2020 2:59 PM By: Submitted 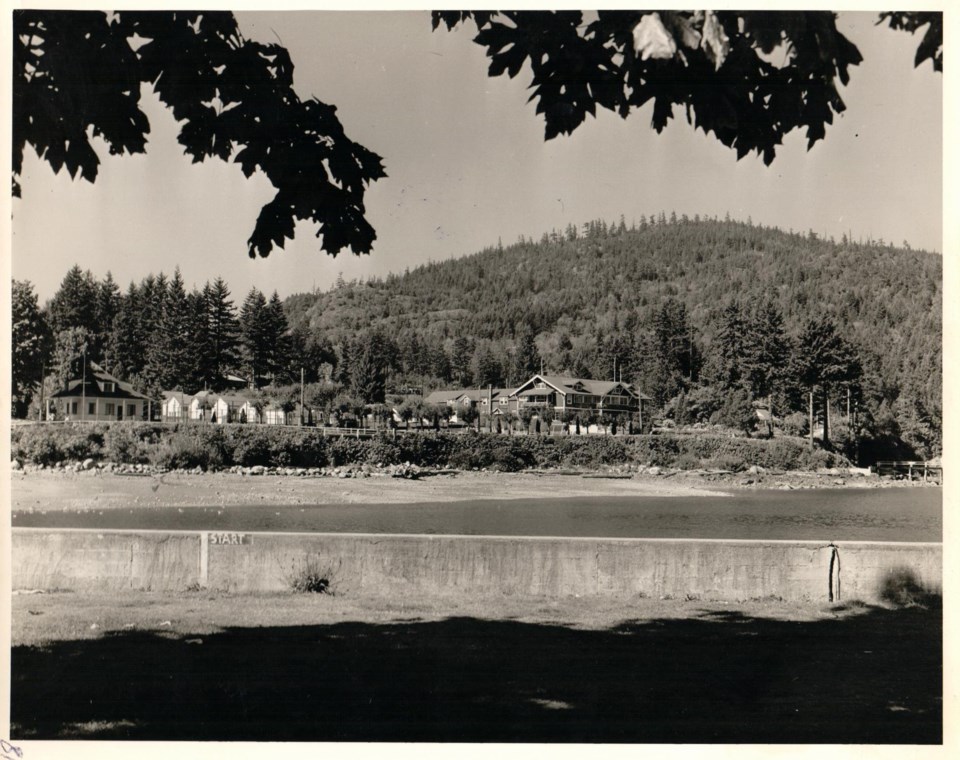 The USSCo. property as it was in its heyday ca.1930 (Photo: Bowen Island Museum and Archives)

The following is part of the Undercurrent's special 100th anniversary of USSCo. & Bowen Island feature.

As reprinted by this very Undercurrent in the 1970s, a taste of the Union Steamships era from Les Wallwork. Wallwork worked as a manager of the Sannie Transportation Company for a time in the mid-1950s and also wrote for the company newsletter:

If you, dear reader, should ever have to tear yourself away from your warm fireside on a bitterly cold night at approximately midnight, stumble along a draughty wharf, down a slippery gangway and onto a small ferryboat in order to warm up the engine for half an hour so so, how would you feel if, on pitching your cigarette butt out of the boat’s window into the sea, the damn thing stayed there in the inky blackness winking at you like a single bloodshot optic.

O.k. you’ve guessed it. The sea was frozen over. Go up one and kiss the teacher. But oh, your poor correspondents! Shattered nerves.

Writing about the weather just now is like carrying coals to Newcastle or taking one’s own wife to Paris – there’s no future in it. However, I suppose it has to be done if only to put it on the record.

No doubt many of you sophisticated city dwellers will have had your troubles but here on Bowen we live in pretty close proximity to the elements and these last two weeks have, to say the least, provided an impressive spectacle – Cecille B. DeMille in Glorious Technicolour with all the stops pulled out could not have done better.

No! Weather like this is no good to anyone, especially if they follow the sea, and the writer who would like to convey his sincere salutations to all those Union Steamships men who were at sea during the past few weeks. “Gentlemen, you earned your corn.”

November is the time of the year when Bowen Island really feels like an island. The mainland seems to have receded further off and a trip to Vancouver becomes quite an event. Only the regular inhabitants live here now. Everyone knows everyone else and a strange face is as noticeable as a skunk in a bed of roses.

The big event of each day is the mail call when practically the entire population of Bowen gather in the Union store at llo’clock each morning to collect their letters and newspapers. This is the time when all the local news and gossip is exchanged and the store does a roaring trade in hot coffee. How much more pleasant this is than having some impersonal mailman push one’s letters through the door each day.

This too is where all social events are announced via the notice board, duly discussed and later sat upon in solemn inquest. Such as the dance which was held last week in aid of the Children’s Christmas Fund and the Turkey Shoot which preceded it. Both these events turned out a great success. Oh, the mad gaity of it all!

Talking of gaity, if any of you good people down at Union were thinking of throwing parties this Christmas or New Year, how about giving good old Bowen a whirl!

The hotel is now open all winter and by prior arrangement dancing can be laid on. The cocktail bar and the pub are always ready and willing to cater to one’s “spiritual” needs and a darn good time can be had for much less money than any plushy nightspot in town can offer.

One thing about living on Bowen Island is that it breeds a detachment from the more lurid newspaper headlines while one can still maintain a spectator’s interest. The nearest approach we have to the Grey Cup is the Lawn Bowling Club’s annual ‘Pot’ and as for the Tupper Commission – why, we haven’t even a single policeman to call our own. Peace – it’s really wonderful!

A final note: If the recent deep freeze returns, consideration is being given to placing Sannie Ferries on runners so that you may yet have the pleasure of catching the 8:30 a.m. dhrosky from Bowen Island driven by Comrade Ivan Doviesovitch and being pursued across to Horseshoe Bay by a pack of howling wolves.

Nevertheless, this New Year has at least brought with it a certain feeling of anticipations – a gentle wind whispering the possibility of change and progress for Bowen Island. As yet, it is merely the veriest zehper, but it could quite easily grow into a howling “Squamish.” For those of us who have the future of the island at heart (and the writer is happy to include himself in their number), this possibility is of major importance.

Not only is Bowen Island our home and source of livelihood, but we are firmly convinced of the vast potentialities, so far untapped, in this beautiful little place.

Of course we realize that all the speculation in the world will not convert a flight of fancy into a hard fact, but, after all, a man can dream, can’t he?

So, just for once let us build a few castles in Spain and see what a peep into the writer’s crystal ball (second-hand and rather misty at that), will bring to light.

Not so many years ago, Bowen Island did a thriving trade in day-trippers. Union boats were literally lined up in Snug Cove disgorging thousands of picnickers, moonlight cruises, and perspiring, baby-laden families hell-bent for a day’s outing by the sea. Then the pattern changed and with the end of the war and gasoline rationing over at last, people started going everywhere by car so that the boat trip and picnic type of holiday gradually fell out of favour.

This left a nucleus of seasonal campers who year-after-year faithfully rent cottages on the Estate, plus the guest at the Bowen Inn who, generally speaking stay for a shorter period of time. Granted, at weekends there is still an influx transient visitors, which certainly livens things up a little, (especially the trade at the pub), but all this is very far from being enough.

It would appear therefore, from the foregoing that, if the island is to go ahead and prosper, an entirely new method of attracting people here will have to be found. For, to put it bluntly, our business is people and, like any other business, we have to please those people. Here on Bowen we have all the raw materials but we simply must package it for the customers.

Now, let’s have a peep into that crystal ball.

Hello, hello, what’s all this. A big car ferry like those on the North Vancouver run unloading hundreds of trippers. Tents and garish booths scattered all over the place, a midway going full blast, juke boxes blaring, and a huge neon sign arching right over Snug Cove – “Welcome to Bowen – the Coney Island of B.C.”

Heaven forbid! Turn the darn thing round as quick as you can and let’s have a look into the other side.

Well now, that’s a lot more peaceful anyway – almost dull in fact. What a lot of little houses, all looking alike too, in neat rows; but where has the hotel gone, and what’s happened to all the summer camps? Look, there’s a line of cars driven by gentlemen in business suits waiting for the ferry to town. What does that notice say? “Commuter Park Estates Ltd. President Jerry Builder.”

Why, it might be any one of a thousand oh – so respectable suburbs with hot and cold running ocean as a desirable extra.

Oh dear, what next! Well let’s just take one last glance into that old crystal and see if we have any more luck.

Ah, now!! That’s a pleasant looking hotel fairly sparkling with bright new paint. Just look at that swimming pool right in front of the hotel with all those little lawns by the pool and the tennis courts. Those people certainly seem certainly seem to be enjoying themselves, lounging in the sun sipping tall iced drinks between swims and watching all those graceful yachts out yonder in the bay. Must be a sailing regatta – ah yes! There are the judges seated on the balcony of the Bowen Island Yacht Club right by the water’s edge.

Have you noticed what a number of wealthy looking folk there are about? Could they be visiting Americans spending their holidays here after hearing about Bowen Island through some attractive and modern publicity way down in their own Californian neck o’ the woods? Well, anyhow, they have got plenty here to keep them happy. Look at the party just off to the Bowen Country Club for a round of golf. I’ll bet they will certainly tell their friends what a marvellous place Bowen Island is when they get home.

Now, that’s odd. Don’t remember seeing those graceful looking houses there before. Why, the whole island, apart from the hotel bay, seems to be dotted with them! Each little valley and secret bay seems to have half a dozen new homes nestling amongst the trees. Look nice, don’t they. Well spaced apart and obviously designed to fit in with the natural surroundings. Why it’s got the fabulous British Properties licked to a frazzle. What lucky people the residents are, especially considering the fact that the breadwinner of the family can live here and still be seated in his office in downtown Vancouver in under an hour by using the smart, speedy-looking car ferry just leaving the wharf.

Wait a minute, who’s that chap sitting on the upper deck of the ferry scribbling away on a pad – seems vaguely familiar somehow. Let’s see if we can read – ah, there it is…”The Heaving Line, Bowne Island News, August, 19…?” Drat it, the crystal is too misty. Wish I could see that date…don’t you?

EDITORIAL: The story of Bowen Island is under the romantic influence
Dec 7, 2020 2:51 PM
Comments