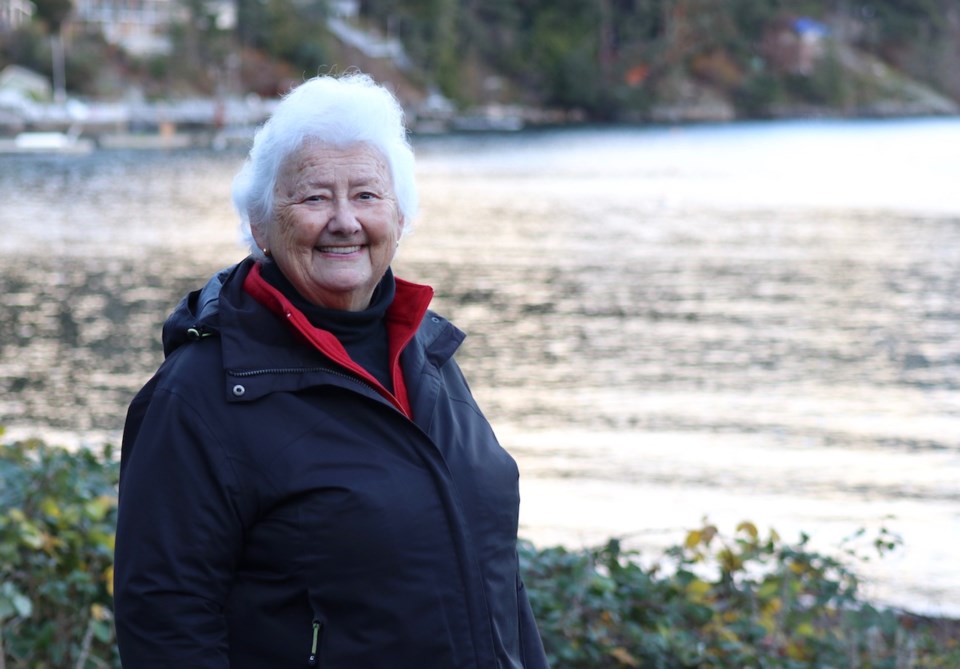 Dr. Lynn Beattie at her home in Deep Bay, where she and her late husband landed (albeit not full-time back then) more than 30 years ago. (Photo: Bronwyn Beairsto)

Bowen Islanders may know Lynn McArthur as past president of the Garden Club but it was her illustrious alter-ego, Dr. Lynn Beattie, who was appointed a member of the Order of Canada last week.

Recognized “for her pioneering contributions to the field of geriatric medicine in Canada and abroad,” Beattie was one of 17 British Columbians and 114 Canadians appointed Nov. 27.

As one of the country’s highest civilian honours, the Order of Canada “recognizes outstanding achievement, dedication to the community and service to the nation.”

Beattie made her start in geriatrics in 1971. She’d finished her training in internal medicine and visited a mentor at Toronto Western Hospital, who suggested she work on the hospital’s geriatrics ward.

“The specialty evolved in Canada and I was with the people that were involved with making it happen,” said Beattie.

In 1979, The McArthur-Beattie family moved out West and Beattie returned to her alma mater, UBC.

Starting in about 1980, Beattie developed the training program for geriatric medicine at UBC, was the division’s founding head and for 30 years was medical director for the clinic for Alzheimer’s disease and related disorders.

“There were new opportunities just opening up in the ’80s,” said Beattie. “I happened to be in the right place at the right time to be involved.”

“Age is the biggest risk factor for Alzheimer’s so being in geriatrics was appropriate.”

Looking back at her career, Beattie is particularly proud of developing the geriatric medicine training program. “Now there are more than a couple of people on the ground who can act as consultants for the increasingly aging population that we have in British Columbia and around the world,” she said. “That’s really neat.”

In fact, one of the doctors Beattie trained in that program was too appointed to the Order last week. “It’s very special,” she said. “It means that we’ve come a ways.”

More than 30 years ago, Beattie and her late husband, Dr. Bill McArthur, had friends on Bowen and McArthur started a practice on-island. Though their main address was still on the mainland, the family had a home in Deep Bay (where Beattie now lives full-time).

After decades in medicine at UBC, Beattie retired to professor emeritus status in 2013.

While the Order of Canada ceremony in Ottawa is postponed due to the pandemic, Beattie’s friends and colleagues have wasted no time celebrating the news. “It’s been a really exciting few days for me because I’ve heard from people I haven’t heard from for a long time,” she said, “and that can all be done virtually.”

When it comes to the honour, “I’m thrilled,” said Beattie. “It’s beyond anything I ever imagined.”